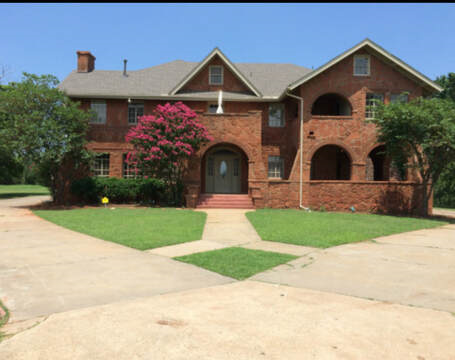 A few years ago, I read the home of Wyatt and Edna Slaughter in Oklahoma City had been restored and had become a Bed and Breakfast. Man, did that bring back memories! My 55-year high school reunion is coming up at the end of September, and I thought it would be great to stay in the house I used to visit and that porch that was one of our favorite hangouts in the summer. Alas, the house is now an airbnb and offers more space than Dan and I need at a price beyond my budget. The new owner, Doris Youngblood, said if the property is not in use when we’re in town she will show us around.

When I say the front porch was one of “our” favorite hangouts, I mean Joe Baumhaft, Howard Thompson, and me. Joe, who died suddenly a few weeks ago (it’s a hazard of getting old), is a story in himself and may be the topic of a future post, but Howard was how I got to know Mrs. Slaughter and the Slaughter house.

When I went to college in the fall of 1966, I left a segregated life. My high school, Northwest Classen, would not be integrated until 1968. The home my parents built in 1958 was in a segregated subdivision. In 1970 a rumor went through the neighborhood that a Black family was going to move in. The daughter of our next-door neighbors went through the neighborhood performing what she must have thought was a reprise of Paul Revere, although it was not the British that were coming. I tried to talk her down to no avail. My parents had just paid off their house, and I asked my father what he planned to do. He was no liberal, but to his credit, he said, “No one who can afford to buy a house here will just let it go to pot.” Then he simply went back inside leaving the neighborhood Paul Revere with her mouth hanging open. And that was the end of that.

My whole life was segregated except for the one week a year I went to church camp, where I came into contact with the children of middle-class Black people and occasionally their parents if they were counselors. One of the parents, Don, was extremely patient with me when I asked him questions about his family and his life, although I’m sure he was rolling his eyes internally.

At any rate, Howard was different. He was older, had been in the Army, and he was from Boston and had the Brahmin accent. I did not know then, and I do not know now what his relationship to the Slaughters was, but for a good part of the time I knew him, he lived in the house with Mrs. Slaughter.

Although Joe and I were white, since we were friends of Howard’s, Mrs. Slaughter tolerated us and even brought us iced tea when we were hanging out on her porch. I had no idea until a few years ago how rich and how important in Oklahoma history the Slaughters were. When you’re young, you just accept things without examining them too closely. Of course I knew the house was huge and was on many acres. What I didn’t know was Mrs. Slaughter’s husband, Dr. Wyatt Slaughter, had come to Oklahoma Territory in 1903 and began buying land. He eventually owned more land than any other Black person in the state. In his segregated times, he was a doctor with many patients. In his 2007 Ralph Ellison: A Biography, Stanford University professor Arnold Rampersad writes that Ellison’s mother lived in a boarding house owned by Mrs. Slaughter’s parents, Jefferson Davis and Uretta Randolph, and Dr. Slaughter delivered Ralph Ellison, who remained close to the Slaughter family and flew to Oklahoma City for Mrs. Slaughter’s funeral when she died unexpectedly. Dr. Slaughter owned a great deal of land in downtown Oklahoma City and built several large office buildings. He died in 1952, long before I came on the scene. When I knew the Slaughters, his son, Wyatt, Jr., ran the business. I’ve written about status deprivation in the past, and the Slaughters, possibly concerned about reprisals for having done too well, kept a very low profile. If you were to meet Wyatt, Jr. on the street, you wouldn’t have known he had two nickels to rub together. Mrs. Slaughter drove a well-maintained 1956 Mercury 2-door until she died in 1969. When I first met Howard, he had a dark green 1964 Mustang. It had six cylinders, and he wanted to upgrade. I was there once when he told Mrs. Slaughter he was thinking about buying a Cadillac, and her face registered horror. I’m sure when they were alone, she elaborated, but all she said in front of us was, “Howard, we don’t do that.” Well, he didn’t buy a Cadillac, but he did buy a Jaguar like the one that was in Mad Men, and it proved just as reliable as the one on the TV series.

Howard could be very persuasive. In 1968 he talked me into going to a George Wallace rally with him at the Oklahoma City fairgrounds because--surprise!—he was concerned about being a Black man alone in that crowd. It was an experience. I still have the handouts from that rally. As we were leaving, Wallace told Howard he looked like an intelligent young man. He looked at me like I was crazy. I don’t think I ever told my parents about that adventure.

My grandmother went to spend much of the winter of 1969-70 in Phoenix with one of her nieces, so I was staying at her house when one night Howard called in tears. Mrs. Slaughter had died at a party she’d gone to with friends. He was distraught. I’m not sure when Howard moved from the Slaughter house, but it was some years later. I moved to Columbus in 1971, and when I came to visit my family, he was there. As I recall, he closed off her bedroom area, so I never saw that part of the house. My life became peripatetic with stops in New York, Los Angeles, Boston, San Jose, Austin, and Kansas City. Howard and I lost touch. I understand he moved back to Boston, but I’m not sure when or where in Boston he moved. It happens.

What I remember about the house is it had murals in the dining room. The house was built in 1937, and the story I heard was the murals were painted by out-of-work, possibly WPA, artists. I also remember the house stayed cool in the summer even though it was not air conditioned. It was built on high ground and caught the breeze.

The Slaughter house is at 3101 NE 50th St., Oklahoma City, OK 73121. It is now known as The Mansion and is on the National Register of Historic Places.